Ratanakiri is a province (khaet) of Cambodia located in the remote northeast. It borders the provinces of Mondulkiri to the south and Stung Treng to the west and the countries of Laos and Vietnam to the north and east, respectively. The province extends from the mountains of the Annamite Range in the north, across a hilly plateau between the Tonle San and Tonle Srepok rivers, to tropical deciduous forests in the south. In recent years, logging and mining have scarred Ratanakiri’s environment, long known for its beauty.

Ratanakiri is located in Cambodia’s far northeast bordered by Laos to the north, Vietnam to the east, Mondulkiri to the south, and Stung Treng to the west. This rural rugged province is a 70% ethnic minority, which are known as “Chunchiet”. Ratanakiri was as recently as 2002 seriously off the beaten track but has since been “discovered” step by step.

Still, while you won’t get any bragging rights for coming here, it’s well worth the effort to do so, and once you get away from it’s capital Banlung you won’t run into too many other tourists. So Ratanakiri is still a remote province in Northeastern Cambodia worth to visit. The word “Ratanakiri” itself is a derivative of two Cambodian words, which are combined to mean “place of gems and mountains.” The word comes from the Sanskrit words Ratna (gem) and giri (mountain).

It’s quite dusty capital, Banlung, is located in the central highlands of the province, approximately 365 miles (586 kilometres) from Phnom Penh and reminds one of a wild western city, even if it’s the wild east. Its wide red laterite roads are bordered by new, recently build houses replacing the …

Ratanakiri is situated on the north – east plateau (approx. altitude around 200-400 metres), 636 Km from Phnom Penh. It is bordering Vietnam on the east, Laos PDR on the North, Steung Treng province on the West and Mondulkiri on the South. There are two bigger rivers crossing the province ( Sre Pork and Sresan River ). The total area of Ratanakiri is about 10,782 square …

Ratanakiri Province has a climate like the other areas in the country, there are 3 seasons :

– Rainy season: June – October (<27c)
– Cool season: November- February (>24c) – Hot season: March- May :
Temperature: from 20c -32c Ratanakiri’s average temperature throughout the year is definately lower than in the other areas of Cambodia (except Mondulkiri …

There are 8 different hill tribes ethnic groups in Ratanakiri. Most of them live in the deeper jungle, on the hills and covered mountains in small separated villages. Usualy they make their living through traditional ways of cultivation ( shifting agriculture), hunting and collecting fruits from the forest is a must. These old cultures believe in spirits, derived from their animism beliefs. In the whole province there are 63,333 male and 64,774 female with a total of 128,107 inhabitants living. This is 11.8 …

The vast majority of the indigenous peoples living in Ratanakiri are subsistence farmers, who are planting rice, corn, pumpkins etc. Some of them grow an additional catch crop such as peanuts or cashews. There is quite a number of wealthy Cambodians and Vietnamese, who own large plantations surrounding the capital of Banlung. Most of them plant peanuts, coffee, or cashews.

Additionally, Ratanakiri boasts hundreds of square miles of lucrative rubber plantations, of which rubber is mostly exported to neighbouring Vietnam. Due to the present reconstruction of the Cambodian National Highway 19, which runs through the center of the capital of Banlung, the area’s trade with Vietnam will soon rise. Anyhow Ratanakiri is so sparsely populated that the Provincial capital does not have an adequate market compete to other provinces of Cambodia. But in mineral wealth alone, Ratanakiri boasts gold, gemstones, granite and onyx. Fertile red soil, water sources, wild animals and quality hardwoods abound and the weather and scenery are perennial …

Air Flying is, of course, the easiest way to go. There are only 2 flights per week. For more detail, please contact a travel agent. Share Taxi The share taxi pickup trucks only go from Banlung to Stung Treng. Bring food, water, and mosquito repellent, because if there is a breakdown on this quite bumpy backwoods road you may be caught in the jungle for the night (especially during the rainy season). Share taxis usually go in groups in case of a breakdown, but anyhow the other vehicles are usually full as well, so people do get stranded sometimes. The five-hour trip stretches mostly to seven hours for share taxis during the rainy season. The fare is about 35,000 riel per person for an inside seat. Banlung to Stung Treng The 146-km journey from Banlung to Stung Treng takes around 5-7 hours during the rainy season, so knock at least an hour off for the dry season.

The road is generally lousy, passing through areas of bomb craters that create deep lakes during the rainy season, but you can skirt around the perimeter of most of them. Where you can’t, the road goes zigzagging through the jungle, and is slow and slippery in the wet months. However, there are a few decent stretches, …

Ratanakiri is a large province and almost all of the areas is covered by forest, and uninhabited. This reveals that natural resources and ecological systems are largely remaining undiscovered and undisturbed by man. Something that many are worried that if no timely and appropriate measures are enforced, the similar thing may take place as those in Cambodia neighbors the over-exploitation and subsequent degradation (or even extinction) of natural resources and ecological systems. In order to help Cambodia to be able to keep this cradle of ecosystem, we therefore urge all visitors, including our guests, to keep in mind of this fragile resources, and hence apply the ecotourism approach when visiting the province. The following are some of the places that should be visited. Of course, there are many things in many places of Ratanakiri that awaits your …

It’s an unlikely name for a restaurant with the best food in town. It turns out that an American used to be the owner and cook of the place. He taught the staff to cook the Western dishes on the menu and also to be meticulous in the cleanliness of the place. They got the idea, as it’s a simple but well taken care of restaurant.

If you’ve been in the bush a while, they serve up a mean hamburger with all of the trimmings of a California Burger with tasty fries on the side. There are plenty of choices of Western and Khmer food and if you want something special made up for you, the friendly staffs are happy to accommodate you. Open all day. The restaurant rents Honda Dream motorcycles for US$ 5 a day.

Situated Next to the airport. They serve Khmer, Western and Thai food throughout the day, starting with breakfast. It’s a friendly place and the food is good. Market Food Stands: Located near the market and share taxi area is a bunch of simple noodle and rice dish shops, if you want to eat the cheap way.

More Details
Where to relax in Ratanakiri province

* Where to relax in Ratanakiri province, Cambodia

Banlung Guesthouse: Situated near the market. Very clean rooms with a share bath go for US$ 3. Banlung Guesthouse: Near the airport. This friendly place has fan rooms with a bathroom inside for US$ 5 and a/c rooms for US$ 10. They have a restaurant and can arrange guided trips to the local attractions and beyond. They also have guides who speak the various hill tribe dialects and can take you to some outlying villages.

They rent Honda Dreams for US$ 5 a day and also a pickup truck with a driver for US$ 50 a day, including the fuel. They are currently trying to reorganize their elephant trekking after the recent death of the elephant that was normally used. Mountain Guesthouse: (tel. 075/974047) Fairly decent simple rooms are available at US$ 5 a night for a room with a fan and bathroom. The walls are paper-thin so watch the hanky-panky; they have a small restaurant that serves breakfast. They also have Honda Dreams for rent at US$ 5 a day. The English-speaking owner of the place helps you to organize trekking tours if you?re interested. Mountain Guesthouse 2: This is run by the sister of the owner of the similarly named place mentioned above. They have Spartan …

More Details
Where to Shopping in Ratanakiri Province

A shopping spree starts at the Banlung market. Shopping bargains can be found on intricate stone, woodcarvings, gemstones and other varieties of goods. Many goods are brought in by tribes, like baskets, crossbows, gourds (water containers), bracelets, necklaces, clothes and pipes from the outskirts of the town, which make for an interesting and very colourful morning …

Cha Ong waterfall is in the forest in Cha Ong village, O’Chum commune, about 2 kilometers west of Ban Loung provincial town. It …

The Eisey Patamak Mountain, Ratanakiri is the favorite haunt for the lovers of adventure sports as well as trekkers. The hilly … 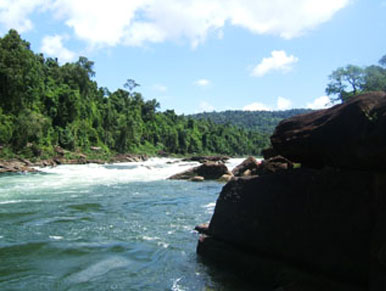 This place has a pond. the visitors can go there to see the animals and birds which comes to at the pond .Beside this the … 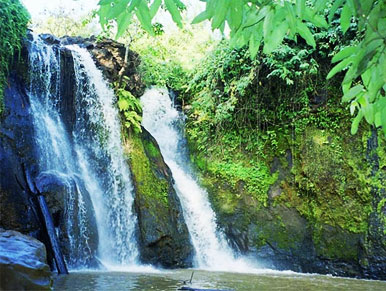 Virachey National Park is a national park in north-eastern Cambodia. Although partly protecting flora and fauna of international … 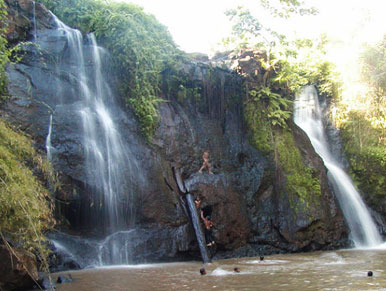 Ou Sensranoh Waterfall is situated 9 km. south of Banlung. The height of it is 18m. and the water flows and falls all the time …

We went to see 3 waterfalls in total, visiting Ka Tieng, Kinchaan and Chaa Ong. To get to Ka Tieng. we had to go through a small …

Lumphat Wildlife Sanctuary is situated 37km. south of Banlung. With a total land area of 250,000 ha. there are special kinds of … 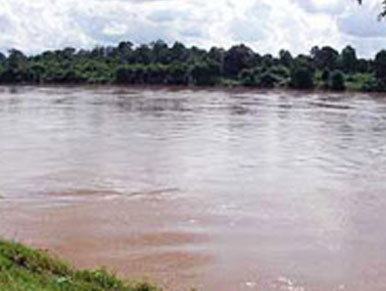 Ou Chaloy is one of the popular tourist attractions in Ratanakiri. Ou Chaloy, Ratanakiri is located on the Sre Pok River. This … 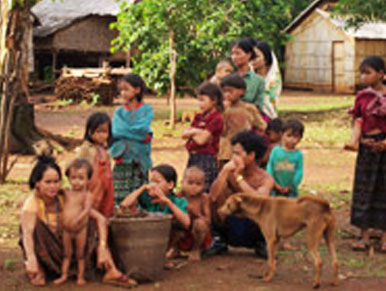 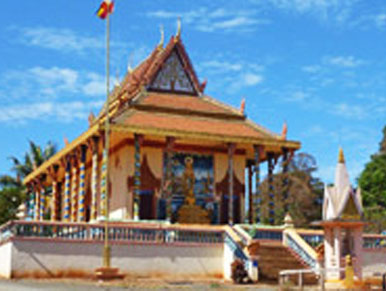 The Wat Rah-Tahn-Ah-Rahm (Reclining Buddha), Ratanakiri is a well known spot for travelers coming to this northeastern Cambodian …