Otres Beach is the next beach south of Ochheuteal Beach and resembles Ochheuteal in many ways – a three kilometer crescent of near white sand facing the southwest. But Otres is far less developed and touristed than Ochheuteal, offering a more leisurely, relaxed atmosphere, and caught the eye of Forbes this year, listed amongst the Top 22 Beaches in Asia. Though much of the beach was recently closed for a development project, more than a kilometer remains open and retains the same laid back feel. There are no hotels, spas or large restaurants on Otres, just a string of beach-shack bars, restaurants and bungalows stretching along the sand from the intersection to the new development project.

Most all of the beach restaurants serve seafood and more, but each place has its own unique flavor. There are several bungalows and small guesthouses on the beach, most sitting right on the sand just a few meters from the water. Price and quality of the rooms and bungalows varies, so shop around for the room that best suits your budget and requirements. Bear in mind that the seclusion and lack of development that affords Otres its tranquil atmosphere also limits some services. After dark it can be difficult to travel between Otres and town.

To get to Otres: 1) The road from Ochheuteal over the hill through Queen Hill Resort allows easy motorcycle access but is blocked to cars and tuk-tuks. 2) By car or tuk-tuk from Ochheuteal: follow Polaway Street (1 Kanda Street) to the end of the pavement and turn left, cross the bridge and proceed about 500m to the next right turn. Turn and follow the road about 2.3km to the beach. Rough road. 3) Omui Street from downtown is paved and in good condition. Follow to the Otres turnoff and turn left. 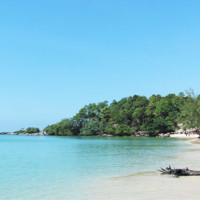 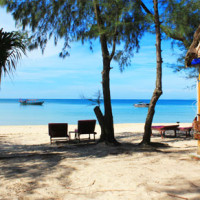